In 1950, people were resettled from various parts of the inner-city to Janta Colony. Chief Minister Morarji Desai’s ambition to make Bombay like Paris took form by removing the pavement dwellers from streets of South Bombay (Karnak Bandar, Marine Drive, Worli, Tulsi wadi) and resettling them in Janata Colony, which was more than 20 km away and had no basic infrastructure.

Over twenty-five years, people made the barren patch of seven acres habitable. However, the presence of Janta Colony was seen as unsafe for the emerging Bhabha Atomic Research Centre. Therefore, in the name of public purpose, an eviction notice was issued by the local government. A legal struggle and demonstrations ensued, but were thwarted by the state. 72,000 people from Janata Colony were evicted and resettled to Cheetah Camp in 1976 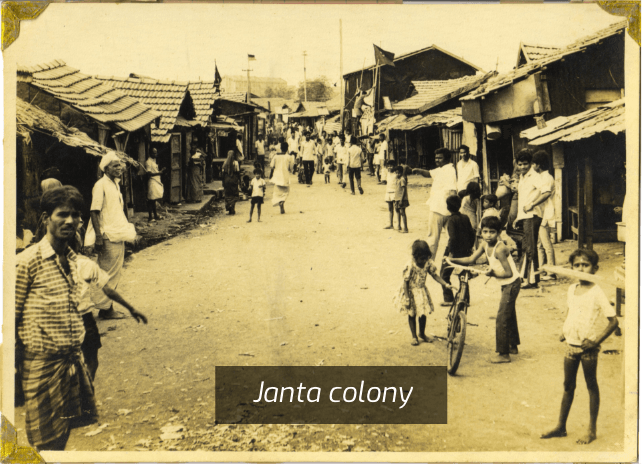 In 1976, these indicative threats became real; demolitions were carried out just before the monsoon and residents were shifted to a former cremation ground, a mile away from Janta Colony. As a local leader says: People were taken to Cheetah Camp in a lorry, each family was given a 10x10 [foot] patch and asked to live there. For the next five years people struggled to get basic civic amenities of water, lighting, roads & pavements, drainage systems, sanitation, dispensary, market and transportation etc. Each of the existing amenities in the area embeds a story of struggle, protests, petitioning the state for years, and self-help. The education of an entire generation of young children became a casualty to the displacement.

Over forty years, Cheetah Camp seems to have attained stability and built itself up. Residents have built ground plus one pucca houses with access to electricity, water, household toilets, and drainage. Cheetah Camp now also has a vibrant bag-making economy. While there continue to be inadequacies in public infrastructure, local organisations have contributed to a lively community life and created amenities like madarasas, masjids, schools and small hospitals.

Fears of insecure tenure haunts them yet again

These fears are evoked by the declaration of the area as a Resettlement & Rehabilitation zone by the proposed Development Plan of Mumbai 2014-34.

About half the area of Cheetah Camp has been declared as a resettlement and rehabilitation zone.

The largest metro car shed in the city will occupy 30 acres of land. Together with a proposed jail and road widening projects, it threatens to 'resettle' 450-500 households in Sector C and D yet again.

What explains this ongoing unsettlement? What are the cumulative costs of such processes on people? How does one explain the logic of the state that exposes people to multiple displacements in a single lifetime? While people try to deal with new threats, using the memories and learnings from past displacements, isn’t such violence preventable? Does the city even acknowledge the costs that some people have to bear to ‘be‘ in the city?