Mumbai is one of few cities in the world which has a national park — the Sanjay Gandhi National Park (SGNP) — within its boundaries. SGNP has been steadily squeezed over time under pressure from expanding settlements on either side.

In 1995, the Bombay Environment Action Group filed a public interest litigation alleging that “large areas of the park look like slum colonies” and sought removal of “illegal encroachments” to protect the Park. Making matters more complex, the area within SGNP contained schools, ration shops, dispensaries and houses provided with municipal services. Many of these facilities had existed before the area was declared a Park in 1996, and before the Park boundaries were clearly demarcated, which happened only in 1997.

The High Court supported the demolition of “encroachments’’ while upholding the rehabilitation rights of those who could prove their existence in the electoral rolls before 1 January 1995, in line with the State Government slum rehabilitation scheme (SRS) for slums. Only 33,000 of the estimated 80,000 houses were deemed eligible for rehabilitation.

Between 1997-2004 violent evictions took place where more than 2 lakh people were displaced and scores were injured.

Desperate for shelter, many of those displaced fled to Nala Sopara, drawing on kinship networks already established in the area. Sapana Doshi describes the SGNP evictions as the first ‘green’ displacement in Mumbai.

Public sentiment in Mumbai largely supported the demolitions with the middle classes seeing these slums as violating the law and harming the environment. But a local builder in Nala Sopara, evocatively described the evictions as a bhookamp (earthquake) that ravaged and ruptured people’s lives.

The Mill district in Central Mumbai — often called Girangaon — spanned more than 600 acres and had more than a hundred mills in the early 20th century. Mumbai’s tremendous growth has been closely linked to the rise of the mills and the cotton textile industry, and has contributed to the identity of this city as one that can support the stable growth and fortunes of the urban poor, migrant and working classes. The closure of the mills have ruptured this sense of the city’s identity, culture and possibility. After the mills closed, people were forced to search for new ways of making a life and livelihood. This search led some of them to Nala Sopara.

Both industrial workers and industrial units have been displaced from the city by forces of deindustrialisation. In the nineties, a speculative boom in property and real estate markets encouraged the push-out of manufacturing units and the conversion of these industrial lands into commercial and high-end residential developments. The redevelopment of the mill lands of Central Mumbai is only the most notorious example of this phenomenon.

In 2003, the business lobby, Bombay First, and McKinsey & Company teamed up to produce a vision for transforming Mumbai into a world-class city by 2013.

“In Vision Mumbai, McKinsey says the number of people living in slums should be reduced to about 10-20%. … Supporters of the (slum) demolition claim that slum-dwellers are holding back the city’s forward march” (Guardian Mar 1, 2005).

The Chief Minister of Maharashtra took this vision seriously, constituting a task force to study the McKinsey report’s proposals and make final recommendations for achieving this transition to world-class. Since then, numerous proposals for redeveloping and upgrading Mumbai have been announced and implemented. The transition to becoming world class typically involves large infrastructure and redevelopment projects that require the displacement of countless members of the poor and working classes living in informal settlements. 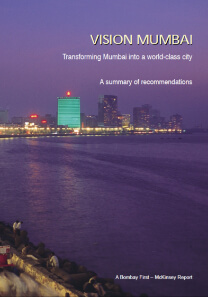